The design objective was to achieve the required pumping action of internal combustion engines and to eliminate the stops and starts of the pistons working in a reciprocating engine and to eliminate the side forces of the connecting rod pushing the piston against the cylinder wall creating resistance. In addition, it eliminates the need for a crankshaft, valves, rods, cam shaft, etc. etc.

In the CC engine the pistons and the cylinders are in direct alignment, the direction or velocity of the piston cylinder does not change (except with change of engine speed). There is no side loading between piston to cylinder walls, hence reduced resistance & wear. (see illustration “A”) 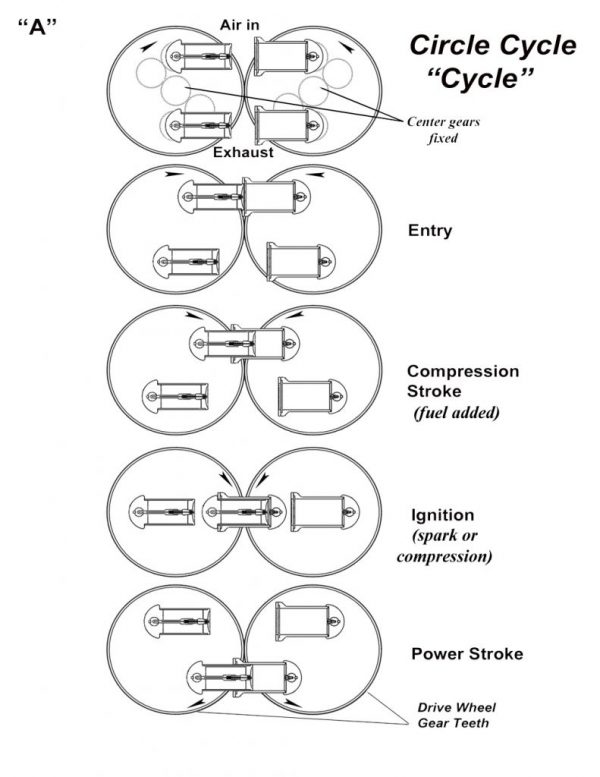 The dynamics of the CC engine is achieved by mechanically counter rotating two separate wheels on parallel axis, one holding pistons and one holding cylinders (there can be multiple “banks” of piston, cylinder wheels, and typically 3 or 4 piston/cylinder sets per bank). The pistons and cylinders are designed to rotate in the opposite direction of their carrier wheel forming an orbital pattern related to the movement of the carrier wheels. Simply put the pistons always face their mating cylinder and the cylinder always faces its mating piston. This arrangement allows multiple pistons and mating cylinders to engage each other (the stroke), this engagement provides the compression and combustion for power without reciprocating motion.

In the CC engine, both pistons and cylinders are in motion towards each other for the compression stroke and in motion away from each other for the power stroke. The stroke is not limited by the angle of a connecting rod, as is the case with reciprocating engines. There is no exhaust or intake valves, the configuration of the combustion chamber and the location of the spark plug (if needed) can be optimized for the most efficient burn of fuel.

A significant difference between the CC engine and other internal combustion engines is the “stroke”. With a conventional reciprocating internal combustion engine, the piston begins its “compression stroke” from zero at the bottom of the stroke, then increases its speed until halfway up its stroke, then it begins to slow to another lull at top dead center. The following “power stroke” is the same. Acceleration from a stopped position thru half the power stroke and then deceleration to a stop at the end of the power stroke. No matter how fast the engine is spinning, each piston must still move its mass from a stopped condition, to rapid acceleration, then deceleration and stop. The higher the rpm, the more exaggerated the condition, the faster it must accelerate and decelerate for each revolution of the engine.

In the unique Circle Cycle engine, the mass of the pistons and cylinders are at a constant orbital speed for any given engine rpm. They do not accelerate or decelerate unless the overall rpm of the engine changes. (longer stroke to bore ratios are achieved by drive wheel dia., drive wheel overlap, and piston/cylinder lengths) The compression stroke and power stroke are a result of the overlapping orbits of the piston wheel to the cylinder wheel.

Because the pistons and cylinders in the CC engine totally disengage, there is no need for exhaust or intake valves, or the machinery to operate them. In 2-cycle engines, part of the “stroke” is used to achieve the “breathing” of the engine. In the CC engine (which is a 2-cycle engine), when the piston and cylinder separate at the end of the power stroke, the full diameter of the cylinder is open for the exhaust to exit at the bottom of the piston/cylinder chamber and is assisted by the cooling and ventilating air that is applied at the top of the chamber.

In the CC engine, both the cylinder wheels and the piston wheels are in balance and the motion dynamics do not require a separate flywheel to mitigate power surges (each wheel is a flywheel). When the engine is running, there is minimal to no vibration, evidence of its efficiency. The CC engine can idle as low as 130 rpm’s.

Simple geometric relationships show that an engine cylinder with longer stroke-to-bore ratio will have a smaller surface area exposed to the combustion chamber gasses compared to a cylinder with shorter stroke-to-bore ratio. The smaller area leads directly to reduced in-cylinder heat transfer, increased energy transfer and therefore, higher efficiency. (example, a CC engine with a bore of 2.3 would have a stroke of 3.9)

The basics of motion of the CC engine has not changed over the period of our R&D efforts, but the application of the concept has seen many changes in design details and size. In the 12 years of development, 7 different designs have been completed. This includes the mechanics of motion, the features employed, the size and compactness, number of pistons and cylinders (from 3 to 8) and materials used. Extended periods of testing of the component parts, compression seals, fuel injection systems, materials, etc., have evolved into our latest design, the CC6 and CC7.

All in all the CC Engine is a unique concept that will advance the internal combustion engine to a new level of efficiency at reduced weight and cost.

The CC engine is a major means of reducing air pollution in the world by providing horsepower more efficiency.

The video on the right compares the basic motion of the Circlecycle orbital engine to that of a conventional, reciprocating internal combustion engine.

The video on the right demonstrates piston/cylinder alignment for a gear driven configuration.

The video on the right demonstrates piston/cylinder alignment for a polychain belt driven configuration.

To learn more about our unique and innovative concept, please visit our “Evolution” page. 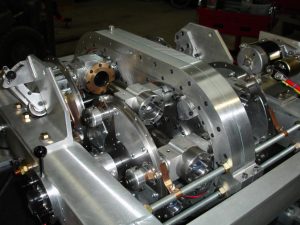